Or check our Popular Categories...

When it comes to writing essays, there are a lot of different types you can use. Depending on your level in school and your specific assignment, the essay type that you’ll be asked to write will vary. In this post, we’ll give you a rundown of the five main types of essays so that you’ll know exactly what to expect when your teacher assigns you one. 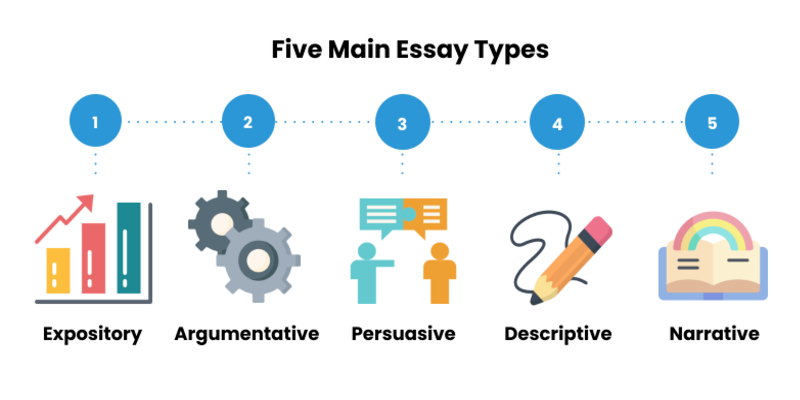 The Five Main Types of Essays

Before we go further, you need to understand that there are different types of essays. The type of essay you’ll be asked to write will usually be determined by the level you’re at in school and the specific assignment you’re working on.

Here are the five main types of essays that you’re likely to encounter:

Now that you know the five main types of essays, let’s take a closer look at each one.

An argumentative essay is one in which the writer tries to convince their reader to agree with a particular point of view. To do this, the writer will use facts and evidence to support their claim. They might also use emotional appeals (pathos) or logical fallacies (logos) in order to try to sway the reader’s opinion. An example of an argumentative essay would be if you were trying to convince your reader that pit bulls are not dangerous dogs. In this case, you would use evidence such as statistics or stories about people who have been attacked by pit bulls in order to try and show that they are not dangerous animals.

READ
What are 5 tips for building a great resume? (Answered!)
Powered by Inline Related Posts

An expository essay is an informative piece of writing in which the writer seeks to explain a topic without offering their own opinion. This type of essay requires the writer to do research on a particular subject and then present that information in a clear and concise way. A good expository essay will usually have around five paragraphs with each one covering a different aspect of the topic at hand. For example, if you were asked to write an expository essay about penguins you might discuss their habitat, diet, life cycle, and what makes them unique from other birds.

A narrative essay is one in which the writer tells a story from their own life experiences. This type of essay usually has a strong emotional element to it as the writer is recounting a personal story. However, just because it’s personal doesn’t mean it can’t be researched! The key with this type of essay is to make sure that your story is interesting and engaging enough for the reader while still staying true to your own experiences. For example, you might write about a time when you had to overcome some sort of obstacle in your life such as moving to a new country or dealing with the death of a loved one.

Descriptive essays are pretty self-explanatory; they describe something. This could be something concrete like an object or animal, or it could be something more abstract like emotions or feelings. When writing a descriptive essay, the key is to focus on showing rather than telling; don’t tell your reader that “the sun was setting,” SHOW them by describing the colors in the sky and how they looked as they were reflecting off of everything around you. A well-written descriptive essay should transport your reader into the scene that you’re describing so that they feel like they’re experiencing it firsthand.

As the name implies, compare and contrast essays are all about finding similarities and differences between two things—usually two different concepts or groups of people. When writing this type of essay, it’s important to first choose what YOU think are the most notable differences or similarities between the two things that you’re comparing before starting to write! Once you have your main points chosen, then all you need to do is flesh them out with supporting details and explanations until you’ve reached your word count limit (or run out of steam). An example topic for a compare and contrast essay could be something like “cat vs dogs” or “summer vs winter.”

What are 5 tips for building a great resume? (Answered!)

The Do’s and Don’ts of Resume Writing

What are Recruiters Looking for in 2022? [Expert Approved]